The area around Lester Prairie was settled in the 1870s, during a time of serious financial depression, followed by years of grasshopper plagues. Farmers suffered greatly, and a large number of farms were foreclosed.

At this time, many people were emigrating from Europe and moving from other parts of Minnesota to buy farms in Bergen Township. They also established businesses in the newly formed village of Lester Prairie.

The town had its beginnings when the Great Northern Railroad built its line in December of 1886.

Lester Prairie was named “Lester” in honor of Maria Lester and her family, who settled in the area, and “Prairie” for the little prairie on which it was situated. 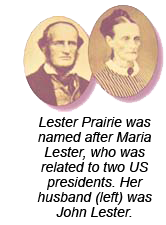 Maria took on the name Lester when she married John Lester, whose last name was originally spelled Liester. The spelling of the name was changed to Lester when John’s ancestors arrived in America on the Mayflower from England.

John and Maria were originally from New York and were married there. After moving many times to different parts of the country, the Lesters heard reports that there were fortunes to be made in the Minnesota Territory, and the family decided to make the move.

They had set up camp in Hastings, Minnesota when they heard about a beautiful little prairie on a pre-historic lake bottom about 45 miles west of Minneapolis, which had been discovered by a trapper and scout.

The Lesters decided to try to locate the spot, cutting their way through the trackless forest.

In August of 1856, they found the prairie and immediately decided to make it their home. They erected a log cabin and made preparations for winter.

Maria’s brother, Nelson Adams, who had accompanied them, died the next month, making him the first white man to die in Bergen Township.

The Lesters later moved to Hutchinson so that their children could attend school.

During the Native American uprising of 1862, the family dismantled their brand new wagon and buried it in the ground in order to hide it, and the family took refuge in a stockade in Hutchinson. However, the wagon was found, dug it up, and burned, along with the family’s log cabin and all their possessions.

After this incident, they left Minnesota for several months, but later returned to their prairie and rebuilt their cabin, where they lived until John died in 1871. Maria lived to be 90 and was buried within a stone’s throw from the spot where they first pitched their tent when they first came to the prairie.